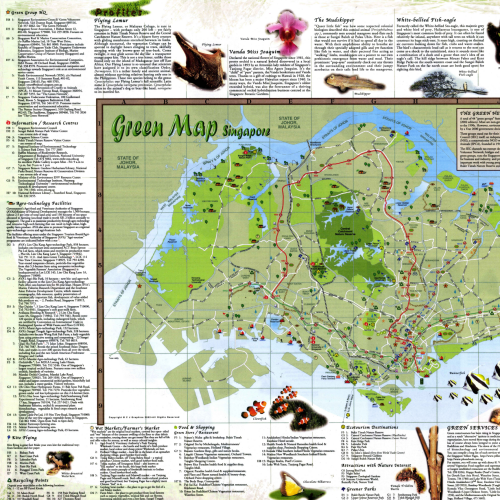 Initiated by the Singapore Environment Council and the Green Volunteers Network, “Project Green Map” was first launched in June 2000 as an attempt to bring together all of Singapore’s eco-resources into a single publication. As they wrote in their overview:

"Singapore is a small island city nation of 4.5 million blessed with abundant rain and sun and thus bountiful nature. We have a developed economy but still manage to preserve a good portion of land as nature reserves, parks and greenery. There are large numbers of terrestrial and aquatic species.

With the Green Map we wanted to raise public awareness about the abundant nature we still had and to overturn the view that Singapore is a concrete city with nothing green left to save.

The effect of the Singapore Green Map is probably more indirect than we imagine. Instead of directly creating a class of green minded citizens the Singapore Green map probably helped to convince some people that conservation is indeed a worthy weekend activity. By getting people to go outdoors to appreciate nature and exposing them to the natural resources we have, fewer people dismiss the environment as something invisible".

" A collaboration among Junior Colleges, Centralized Institute and IP schools in the making of a Green Map of Singapore, the 2016 Advanced Level Geography Syllabus will be providing students with an in-depth study of Sustainable Urban Development. This project invites A level Geography students and teachers to collaborate in the making of an Open Green Map of Singapore. Such a map, when completed will provide both educators and students with a useful information about how sustainable and livable Singapore is.

Singapore, as it is all urban, is a living experiment for pure urban sustainability. The city is conscious of its finite resources and dependency on imports of basic necessities such as water, fuel and agricultural goods to sustain the island nation of 4.5 million people on less than 700 sq. km. In order to create Singapore’s sustainable development strategy, the Inter-Ministerial Committee on Sustainable Development (IMCSD) was created and the output was the Sustainable Blueprint (IMCSD 2009). The Blueprint defines what sustainable development is for Singapore (IMCSD 2009):
• Efficient: Development occurs with less resources and waste
• Clean: Development occurs without polluting the environment
• Green: Development preserves greenery, waterways, and natural heritage"

Check out the video above for an exciting update from SEC! Established in 1995, the Singapore Environment Council (SEC) is an independently managed, non-profit, non-government organization, and institution of public character that nurtures, facilitates and co-ordinates environmental causes in Singapore.