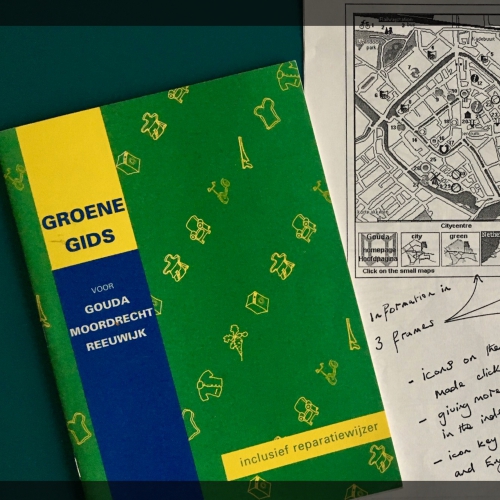 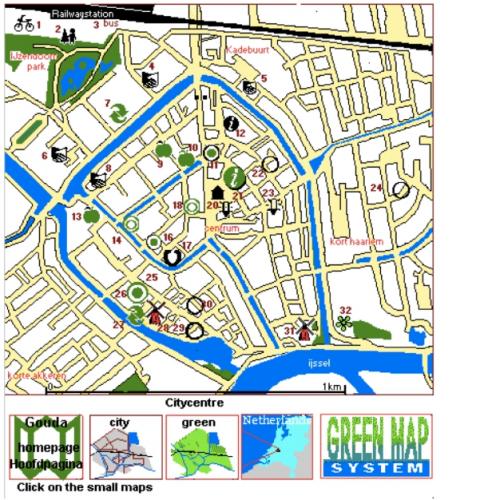 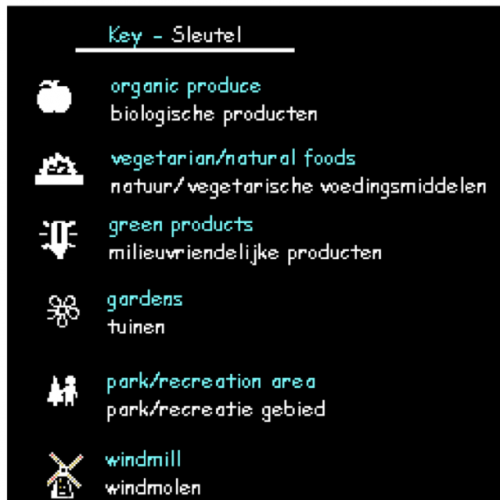 This story was written by Michelle Thomasson in June 2019 about the Gouda GreenMap, the Netherlands.

The Gouda map was developed in a few months at the end of 1996 by Michelle Thomasson and Frits Van de Laan, who was a member of a local ‘Friends of the Earth’ (FOE) group. FOE gave us a small grant for the printing of a paper version of the map along with a directory of local green services, while the Municipal Council supportively shared city map data. Michelle had GIS experience so she was able to take the map data and convert it into one of the first clickable maps on the WWW for the GreenMap project.

Although a city paper map had been provided by the Council, creating a digital version by scanning it was not successful because the subtle map colours did not display with enough contrast on the screen (back then, there were only 16 widely understood colour names in HTML’s graphic user interface).

Using mapping software, Michelle re-drew the map and then added new layers of information using the latest available version of HTML (3.2), with ‘Frames’ and ‘Map’ elements that allowed clickable hyperlinks to the visual map. Frits discovered a glitch in the very first version of the GreenMap’s Icons but Michelle and Frits resolved the problems in the GreenMap Font and 25 of these icons were incorporated with graphic editing software. At the time the Gouda map and Green Map System was using the latest software specification from the W3C and those long forgotten versions of the very early web browsers - Netscape 3 and Internet Explorer 3.

At Green Map's New York office, we were so excited to see this new thing, 'interactivity', would work! Now only did Michelle and Fritz fix the bug in the font, they also shared their emails to help new Green Mapmakers follow their technical decision-making and design process (linked on left).